Get Motivated: 10 Easy Tips to Get Yourself Back in Shape (Finally!) Diabetics must focus on cardio and resistance training

Help prevent diabetes by lowering the metals you comsume 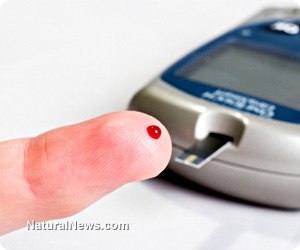 NaturalNews) Fifty years ago, it was virtually unheard of. But today, diabetes mellitus, a serious metabolic disorder, afflicts more than 150 million people globally, with a bulk of this number hailing from North America. And researchers out of Asia, having published their findings back in 2009, exposed toxic heavy metals as a major, and perhaps even primary, contributor to this growing disease epidemic.

Reflective of sobering statistics released by the U.S. Centers for Disease Control and Prevention (CDC) showing that diabetes prevalence increased nearly 50 percent between the years of 1991 and 2000, the study looked at the effects of heavy metals in vitro (in a test tube), in vivo (in living organisms) and in human subjects. The metals zinc, arsenic, cadmium, mercury and nickel were all evaluated.

Recognizing the latter four metals as known neurotoxins, the researchers compared what is already known about diabetes and how it forms and progresses inside the body to heavy metal exposure and how the body responds to it. Based on this analysis, they determined that arsenic, cadmium, mercury and nickel all contribute to the condition known as diabetes, as does a lack of zinc, a nutrient that helps prevent heavy metal damage.

Used in commercial poultry and swine production, arsenic is a highly toxic metalloid that easily dissolves in water and is taken up from the soil by many plants, including rice crops. Besides causing nervous system disorders, peripheral vascular disease, endocrine disruption and cancer, arsenic has also been found to alter certain biological processes that regulate insulin resistance.

“[M]any studies have indicated that arsenic could alter signaling transduction factors… affecting the insulin-stimulated glucose uptake in adipocytes or skeletal muscle cells, which may potentially link with insulin resistance,” wrote the authors.

Arsenic has also been shown in the scientific literature to cause oxidative stress, which the authors of the heavy metal study found has the potential to damage the body’s ability to properly metabolize glucose. In the process, homeostasis is obstructed and the body is made more susceptible to disease formation, which includes diabetes.

Like arsenic, the heavy metal cadmium has no beneficial purpose inside the body and is highly toxic. Science has repeatedly shown that it accumulates in vital organs, and particularly the liver, where it damages organ tubules and blocks the reabsorption of calcium, leading to bone loss. Cadmium also damages the key pathways through which the body regulates glucose metabolism.
“[S]everal studies have shown that cadmium-induced hyperglycemia was associated with increased lipid peroxidation, decreased insulin release, increased activation of gluconeogenic enzymes and impaired insulin receptor,” explain the authors. “Also, cadmium has been shown to impair glucose tolerance in rats.”

Perhaps more well-known than the others in terms of its toxicity, mercury has also been implicated in causing diabetes. A study that began in the 1980s on patients with Minamata disease revealed that those who suffered from organic mercury poisoning also had elevated levels of glucose in their urine. From this, it was deduced that increased mercury levels may be a causative factor in the formation of diabetes.

As it turns out, all three forms of mercury — these include elemental or metallic mercury, inorganic mercury and organic mercury — are associated with causing major biological damage in the body. Altered glucose levels are just one form of this damage, as exposure to mercury in all forms has been shown to promote DNA-damaging oxidative stress.

Many of these same effects are exacerbated by exposure to nickel as well, another heavy metal that accumulates in bodily organs and tissue, particularly when beneficial trace minerals like zinc are lacking. In other words, an excess of harmful metals combined with a lack of beneficial ones is a recipe for chronic disease, and an almost surefire path to developing diabetes.

P.S.  Although the lack of or over abundance of certain metals can potentially lead to diabetes, the good news is that you can reduce or prevent the likelihood of getting this disease in the first place.