Diabetics – For the best results do a combo of cardio and resistance exercises What’s more to blame for obesity: Lack of exercise or eating too much?

Are you in denial about your weight gain? 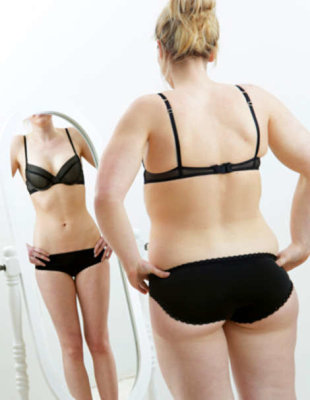 We hear it all the time – America has an obesity problem. It’s true – America is home to more obese people than any other country in the world. But when it comes to our health, the message doesn’t seem to sink in. When surveyed, only 36 percent of Americans say that they’re overweight, according to the most recent Gallup poll. That’s nearly less than half the amount that actually are: 66 percent of American adults are either overweight or obese, according to a Lancet study published in May.

Essentially, most people don’t report being overweight, even though most are.

The data was gathered via phone interview, so it’s important to realize that these numbers reflect both how people perceive themselves and what they’re willing to reveal to a stranger about that perception. But even self-reported numbers showing that only 18 percent of overweight Americans are trying to lose weight explains why Americans aren’t making progress against obesity – we’re not trying to.

This may be more because on a personal level, people don’t realize when they’re actually overweight. The problem may have more to do with proper diagnosis than motivation to drop pounds. Previous research has shown that doctors often feel unequipped to help a patient lose weight. Because of this, doctors may not bring up a patient’s overweight or obesity status during a doctor’s appointment, and instead focus on more medical (and less emotional) topics like blood pressure and cholesterol. To combat this problem, last year the American Medical Association voted to recognize obesity as a disease in the hope that doing so would help doctors treat it, but change has been slow-going.

What can you do? Make sure you bring up your weight in your next doctor’s appointment. Ask your doctor what your Body Mass Index (BMI) is, which will indicate whether you’re normal weight, overweight, or obese. In the interim, you can check it yourself by looking where your weight and height intersect. If it’s higher than it should be, maybe it’s time to drop some of those extra pounds.

P.S.  The best way to drop extra pounds is through diet and exercise. Exercise should include aerobic as well as resistance movements for best results.

P.P.S.  Visit Exercises for Diabetics Today for easy workouts you can start now . . . and be ten pounds lighter in five weeks.

This site uses Akismet to reduce spam. Learn how your comment data is processed.