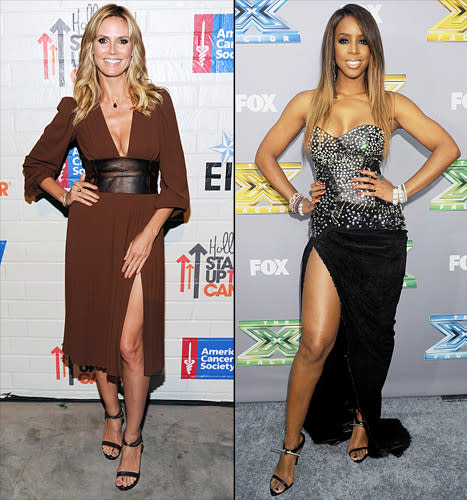 Eat chocolate to slim down? Yes, it’s true, says a study in the American Journal of Clinical Nutrition. In fact, snacking on two small squares a day may help curb a hormone that triggers belly flab. Read on for more tips and tricks from celebs and the nutritionists and trainers who help them stay slim — and drop pounds fast.

Tea Up to Trim Down Green tea = hot-body brew! Those who sipped it daily shed 3 pounds in three months, according to an American Journal of Clinical Nutrition study. “Tea’s catechins can trigger calorie burn,” says dietitian Keri Glassman, who has designed meal plans for Sofia Vergara.

Veg Out More Vegetarians, who typically have less fat in their diets, lost about 5 more pounds than omnivores in two months in a University of South Carolina study. For a similar effect, Glassman, cohost of HLN’s Cook Your Ass Off, suggests going veggie one day a week and eating lean protein (poultry, fish) the other days.

Take a Stand According to a study from the U.K.’s University of Chester, standing an extra three hours a day can burn 720 calories a week — or help you drop 8 pounds a year! Suggests Kelly Rowland‘s trainer, Jeannette Jenkins: “Cook at home rather than eating out and stand while on calls.”

Pack in Protein Start your day with a high-protein breakfast (a Greek yogurt parfait is a great choice) and you can shave 120 calories off lunch, suggests University of Missouri research. Experts say the protein helps release appetite-curbing hormones.

Phone It Thin To dial up your willpower, use a healthy-themed picture as your cellphone wallpaper. People who looked at an image of fruit before a meal ate 106 fewer calories in an Appetite study. The theory: The photo reminds dieters of their goals.

Get on the Chew-Chew People who took twice as many bites of their food consumed 112 fewer calories at each meal, says a study from Iowa State University. Explains one of the researchers, Dr. James Hollis: “Chewing affects the part of our brain linked to satiety.”

P.S.  Spend more quality time with your significant other. Studies have shown that having enjoyable sex with your partner can burn up to 100 calories or more per session.